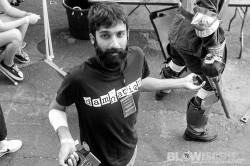 I’ve always had a passion to document bands in the hardcore/punk community since I started going to shows in the early 2000’s. If we didn’t put in the effort to create institutional memory within our scene, who would? The lack of both streaming video on the web and good camera equipment siphoned the life out of that drive by 2003. I had reignited what was left of it sometime in 2008 after getting my hands on the camera I had wanted for years.

I remember being incredibly bored one afternoon in August 2008 and thought I’d swing by to check out the fest. I wasn’t keen on fests but it was something to do on that hot summer day. As I stood there and watched band after band take the stage and the ensuing reactions they received, I spent more time analyzing the people documenting the sets, and the people running the control board from the back of the venue who were splicing the angles in real time. I hadn’t seen a production like that before. My mind raced as I envisioned myself capturing all the stagedives and singalongs. There’s something so energizing that occurs at the interface between band and audience. The reaction and the interplay tell a story about the emotions in the air. I’ve always seen the camera as a tool for telling that narrative as honestly as possible.

I spent that year filming show after show and building my website to repair something I felt hardcore was bereft of. I couldn’t go anywhere to relive my favorite shows, so I created it myself. When Joe called me the following July about shooting This Is Hardcore 2009, I felt like I had been given the opportunity to put everything I believed in to the test. I was proud of the execution and response and Joe was one of the few people who saw value in my project. It was the first time a fest could be relived in its entirety by anyone in the world at any time of the day. For free. It allowed people to think and talk about This Is Hardcore 24/7/365. By 2010, it was expected that I shoot the fest. In 2011, I was officially a part of the fest’s staff and started to work closely with Joe regarding all things This Is Hardcore–whether it be promotional videos or the Kickstarter campaign or just bouncing ideas around about bands and fest logistics.

I’m never content with anything in life, so each year I see the fest as a way to progress and push my craft to the limits. It’s my playground for taking what some see as a mindless nuisance and turning it into something I consider an art form. When I stop and reflect, I see the worn path that brought me to where I am today: from a young teenager with no formal training in how to use a camera and no way of sharing footage to someone who just wants to preserve and document without compromising quality, consistency, or completeness. This Is Hardcore represents the milestones of that progression in my life; it’s what I work towards each year and what reinvigorates me to continue creating.

Hopefully this is the year I unveil my home made aerial camera system: bringing the only cool thing about the NFL to TIHC.