In the rise of Mother of Mercy and demise of Letdown allowed Justin Ogden to step up to the mic for the first time and lead Wrong Answer from a local act with no real plans into a band who has toured and released some great material in a pretty short time. Justin has the rare gift of a solid set of balls who speaks his mind and is either respected for what he has to say or considered an asshole. Here he is, see them Friday started off the big TIH weekend and decide for yourself.. 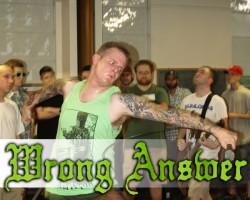 What is naughty youth crew?

Naughty youth crew is an imaginary definition for our style of hardcore.
In early zines, Integrity was referred to as a ‘dark youth crew’ band. Inspired by that, I started calling us naughty youth crew.
The naughty youth crew is everyone who’s into us, all of our friends, everyone who kind of ‘gets’ what we’re doing. We don’t have a gimmick or an easy designation, you can’t really sum up our band with a by-line, so naughty youth crew is just a catch-all phrase to say what we’re all about. Hopefully after people hear us it will make a bit of sense.
What are you thoughts on the rise of fast youth crew bands today?
Stick together is my favorite current hardcore band, face reality from Detroit are amazing as well.
Those bands have been doing their thing for a minute and in that time period, it seems like there’s a band trying to be some variation of either band in almost every state in America. I say good for those bands, bands like straight ahead, chain of strength, youth of today, floorpunch and turning point are some of the best bands to ever exist – I just hope that these fast youth crew bands are paying attention to the real roots of the music they’re playing and not just aping a current trend because they think it’s an easy way to have a built-in fan base 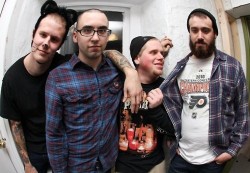 A) all else failed – all else failed was one of the bands I grew up seeing in the suburbs of Philadelphia, the first time I saw them I was 15 and had no idea who they were, it was in a tiny hall in Lansdale, they turned on their samplers and guitar pedals and lurched into some of the craziest music my young ears had ever heard. the live show didn’t disappoint either, the singer Luke beat himself bloody a few songs in, his face was dripping blood all over a ringer shirt with the word “VEGAN” emblazoned on it. to my inexperienced mind, it seemed like a joke – how could this lunatic be a vegan? it was a mind-blowing experience, and I’ve been lucky enough to see AEF about a dozen times since then and they’ve never disappointed me. it’s been a few years and I’m excited to see them again. 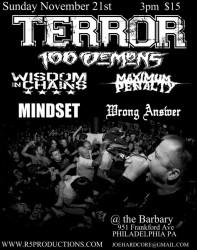 B) face reality – face reality gets my vote as the band that the masses might not know about going into the fest, but will definitely be buzzing about after everything is said and done. I’ve seen this band a couple of times and every time they blow me away, fast straight edge hardcore done right. their enthusiasm and energy translates to their live show, they go off and you can tell they actually give a fuck about what they’re singing about. being able to see a band like this on an all-hardcore lineup at the church when it’s sold out and packed is amazing, I can’t wait

C) agitator/rock bottom/mother of mercy/blacklisted OG lineup/etc – Philadelphia has the best hardcore scene on the planet. a lot of people from out of town are excited for these sets, let’s show them how we do it.

Will let down do a reunion set?
the question has been raised before and i think everyone but drew will do it under the right circumstances, while drew is a little hesitant because well, he’s drew. speaking for myself personally I’ll play anytime as long as the four of us are still straight edge and it makes sense. it would be true to the spirit of let down to make our last appearance sort of a ‘surprise’/not a main draw or anything, i don’t want to embarrass myself having to hype my band’s reunion like it’s some sort of big event, only to be disappointed (but not surprised) when nobody gives a shit. it would be cool to do it as a run-on for some other important event, one of our newer band’s record releases or something like that, just have us all walk up and start playing and throw everybody a curve ball 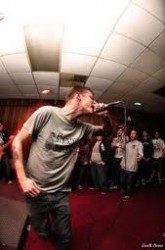 Is the edge strong these days?