To say that I have few friends who understand me better then George is an understatement. We’ve been through more then most will ever come to know. I have and always will be proud of who he is regardless of his band’s popularity. He’s the mad genius who is not only incredible insightful, artistic and creative but someone who can show me where I’m wrong many times when I least expect it.
Many seemed to ride the coattails of Blacklisted when they were constantly in your face on tour or putting out records each year. When they began expanding their sound and exploring their inner collective self, many became critical while others tuned in and became superfans after years of denying them.
It was a tumultuous time for my friend and the band and rumors of their demise shortly after the SCION fest of 2010 spread quickly.
I was excited when he confirmed the rumor of zack trotta (original drummer of blacklisted) and him jamming and even more excited when I got the confirmation from George that they would play an original Blacklisted set at TIH 2011. Blacklisted was the staple of every This Is Hardcore and their sets are the water marks to go off each year.
Here is the truth in black and white from one of my closest friends who just happens to be as honest as they come and brutally and beautifully critical when needed. 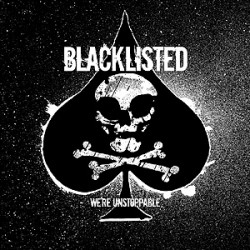 Blacklisted Original Lineup set is one of the most talked about happenings in hardcore right now. How did it come together?
People are talking about it? Is it gonna be weird? To be honest I am a bit self conscious about it, but you know that. It came together whenI was “reunited” with Zach(original drummer) at a gig.
He told me he was getting back into playing drums again and we started talking about doing something new together.
We couldn’t think of a guitar player. He said Jay’s name, but I wasn’t so sure, so I hesitantly told him I’d try it.
After that we texted randomly but it never really came to be
anything. One day he texted me and asked if I would be interested in playing the songs we wrote together, I told him no. We continued sporadically talking, but it didn’t seem like anything was going to happen.
I then told you one day about it, and you said “so its true”
and asked me if I would be interested in doing it at TIHC. I said I don’t know, it  weirded out and I am so removed from the person who wrote those songs. You then talked to me for 2 hours. And I said I’ll talk to Zach and we will see what happens. I had a lot to think about.
But I called Zach and asked him what he thought. He called Jay and asked Jay what he thought. They both said they would be down. So we needed a bass player so I called Sausage and kept asking him if I should do it and for his advice. Then I asked him if he would play bass, he said “yea, that’d be cool”(in a way only Sausage can do)

Blacklisted has been a huge part of my life. Almost the full decade of my 20’s. So its a strange experience to do anything we as a band have ever done, let alone do something like this.  In a weird way I kind of want to do something out of character, in fact I NEED to do things out of character.
I need to grow as a person. No one would ever expect me
to do something like this., but more so I would never expect myself to do this. For anyone that knows me its probably especially strange as I am not really known for “burying” the hatchet, so for me to get on stage with Jay is a big deal to anyone that knows him and I personally. But our falling out has always gone un-talked about. And 100% of the reason for that is because there was nothing TO talk about. We both went separate ways. I think as I got older I realized this more and more. We never had a problem, we are just two polar
opposite people. Which is a bit of a quirky circumstance considering we both have played such strong rolls in each others lives.
I’m a really sensitive, self conscious person, so this has been a weird experience making this happen. But I have made a conscious effort to stay away from the internet as to not have this tainted for us. When I had to go back and listen to these songs, I wasn’t really sparked with nostalgia or anything, which is really weird for me. At first I felt as though I couldn’t do it because i couldn’t relate to what we created then, which would in turn not let me do it.
However once I met up with Zach and Jay, I realized it wasn’t I couldn’t relate. It was those songs were written with no future involved, it was just 4 people meeting in Robby Redcheeks house basement and writing songs together.
It was a completely naive thing. It was “fun”. Blacklisted with Me, Shawn, Bean and Sausage is a totally different animal. That was a connection between 4 people that I will never have again. There was more at stake with those songs, there was an energy that I can’t explain.
Once I differentiated between one and the other I realized it
was an ok thing to do for me at least.

What are you thoughts on TIH and the way it has changed over the past 6 years?
Well I think the first year or two of TIHC was a bit ominous.
Especially coming from Sound And Fury which was such a happy go lucky vibe. Bright room, beaches, even the people that went to the fest were better looking it seemed. When the first two This Is Hardcores happened there was a very dark stigma around you as a person and who you chose to keep company with, not to mention people being skeptical of you being a promoter. Then you walk into the club and its this really dark room, outside is only hot concrete and most of the people look like brutes. But every year it has gotten better.
I feel as though not only you as a promoter has gone above and beyond, but as a person you have grown each year with it, in a more positive light. I think each year you have given people more and more of an opportunity to participate and take part in the fest and things surrounding it.
Which is what hardcore needs. It needs a stronger sense of community. And not just the “oh they are part of my Facebook group”  or “They RT all my tweets” community. It needs people doing more real stuff. Tangible things. For example i was looking online the other day and saw a Martin from Terror put out a zine at Sound and Fury. This is a person that is on tour all year and in multiple bands, yet still took time and made a zine. In the past Scott from Terror has done the same.
Ned from Title Fight, who also plays in Disengage started a record label, Back To Back records. Dave Sausage who plays in Blacklisted runs Six Feet Under Records, Even when you look back at the period where Lockin Out was big, they were doing everything, zines, record label bands, etc etc.
Which I think is great. But it shows how little people are doing that aren’t IN bands. People need to get involved. On
top of that sentiment, more WOMEN need to get involved. So many shows I go to just feel like a series of assembly line moments constructing what is in the end white male dominated fun. Everyone should contribute and try to be heard.
I think this year you really really have shown that aspect of hardcore. I hope people see that and they maybe light their own torch and start doing their own things, zines,
bands, booking shows, etc etc. We can only hope. The only aspect I wish you would ban from all shows are photographers and video tapers(no offense Sunny). 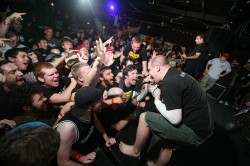 Is there a new project in the works for you?
Randomly I like to think so. But honestly no. I go back and forth to much between what I want to do, if I want to do it, etc etc.
Its a weird period for me right now. Not being in a band is strange,considering what I said above regarding blacklisted being such a huge part of almost the entire decade of my 20’s. I guess we will see what happens. I just have to overcome some weird obstacles I create daily. 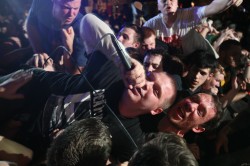 Who are you looking forward to seeing at TIH2011?
I am looking forward to seeing Stick Together and Dead End Path. How crazy is it that of all the places in the world Wilkes Barre, PA has the best bands? What are the odds? Besides those two their are so many other great bands, now and in the past. But right now those two strike chords in me and though I get to see both sort of regularly I always
look forward to seeing them. I am also looking forward to seeing Nails which is a whole different animal. An actual animal when they play.
Every member is so good at what they do and the pull it off unfazed by anything around them and watching that in a festival atmosphere is always great. I have seen Nails a good amount of times in a bunch of different places and I have never NOT seen them blow people away.

Blacklisted, Cold World and Wisdom In Chains are the only bands that have played every year, does it get old playing each year?

I feel spoiled so I don’t really know. The actual act of getting on stage and playing never gets old. Hardcore goes through a lot of waves so there always feels to be a different energy in the room every year when you play.
Even when you just watch bands. No two bands back to
back carry the same energy. For example, From Ashes Rise and Madball,both sets will have a totally different vibe, almost feeling like you are at a totally different show, but both exciting. This is a weird question to answer.
Because I have also played every year, so I will
say if someone didn’t play last year but got to play this year, they may have a different energy going into it, people may be more excited to see them in that environment.
But I would never say it gets old. 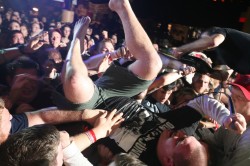