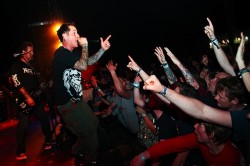 At the beginning of TIH there was few if any bands that would take the fest serious enough to agree to play. H20 was one of the few bands along with Terror that took the leap of faith and played the first This Is Hardcore in 2006. Since then.. well you know the rest. It brings me great pleasure to have them come back again and looking at the day and bands they’re with this year, it will blow their past TIH performance out of the water.

TIH’s first year back in ’06 H20 was the first long running NYHC band to get TIH a chance, how does it feel to be coming back to Philly for TIH?
Philly has always been H2Os 2nd Home on the East Coast. We’ve played some of our best shows to date there.
Playing the TIH 06 was one of those great shows. Coming back and playing it again is gonna be even better,since the last time we played it Nothing To Prove was released and now we have a covers album coming out to so,this will be the first show in the US that we get to play some covers songs live which I’m excited about and to have my wife and son there makes it even better.

You’re playing in between Youth of Today and Token Entry, as a livelong hardcore “kid” how does that make you feel ?
My first tattoo ever was a Token Entry tat,I moved from MD by myself in 88 and got dropped off at CBGBS with all my bags at a Token Entry show to link up with Timmy Chunks because I was moving in with him in Flushing Queens.
I haven’t seen them play since late 80s,early 90s I’m so siked for that. YOT i mean that band inspired me as a teenager and GB to become a vegetarian and i still am today. I Just saw YOT in Pomona and they killed it,it was great to hear those songs again and see a whole new generation of kids going off and singing every word!
We are in a great Hardcore sandwich that night brouhaha I want to watch both of them for sure. My son knows Timmy from out here in LA and his daughters and he’s never seen Timmy on stage,so its gonna be awesome.

How has your non profit public speaking with One Life One Chance been going?
OLOC is going great,booking up Schools for This coming school year and having some incredible meetings with other Drug Awareness Foundations etc.I’ve done 18 schools so far and they have all been amazing in so many different ways,every school is different. Just trying to inspire kids to be smart about there choices,don’t give in to peer pressure,be themselves and follow there dreams. 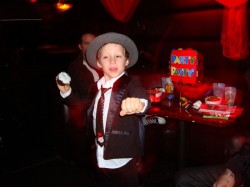 Will Max be making his TIH debut this year?
Maxball will be in full effect this year hes very excited. we are gonna hit the Philly streets and see the rocky statue,run the stairs and eat some good food!

How does it feel to still be a band kids look forward to seeing after all these years?
So Blessed man! We had a 7 year break from making albums, that could of went a whole different way, where people forgot about us But instead,they waited we appreciate that more than ever !That also proves once again,why hardcore is more than music, it’s a lifestyle and the real sincere lyrics and message that bands sang about when i was growing up, that stuck with me and changed my life forever (Thank You Minor Threat,GB,7-Seconds) in such a positive way.

I met my wife from hardcore, when i was on tour as a roadie and now I’ve been married 15yrs!